Printing has always been an issue with Citrix, or the Remote Desktop Services (RDS), and still is. Therefore, I have compiled a list of "Printing rules with Citrix" where parts of it also apply to pure Remote Desktop Services. Settings are for XenApp / XenDesktop and Microsoft Windows Server 2008 R2 and above, but you will find most or some of the settings work with previous versions, as well.

This is a renewed and extended version; a 2017 edition, if you like.

NOTE: These are the original 10 Citrix printing rules that I originally published in 2011. You might find them on other websites where the author just copied my content, unfit to create content of their own. Please don't support those sites or authors.

Before you check out the rules, have a look at some printing basics for better understanding. When I first published the printing rules, a lot of questions were asked because the basic printing concepts were not known. Please take your time to review the print basics.

Client printer and their print paths

There are two types of client printer: a) locally attached; and b) Network printers locally connected. In both cases, printers are handled as client printers but during connection, the VDA detects that the second client printer (b) is a Network printer. If the VDA can reach the print server and has access rights to the printer object, then the default Citrix print policy applies for DIRECT print.

Have a look at the following interactive graphic: 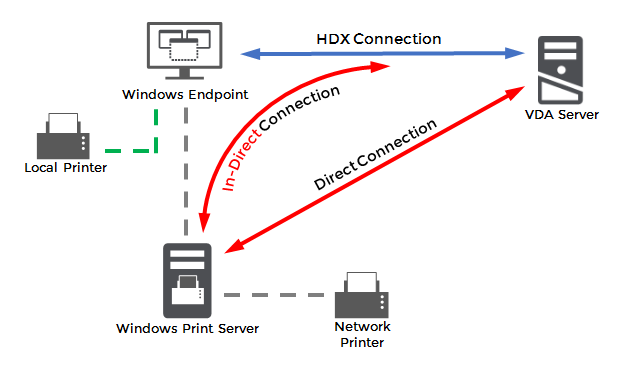 Direct print involves Microsoft Point and Print (P2P) and the main purpose is to automatically and seamlessly install the required printer driver from the print server (also for no admin users). The native 3rd party printer driver (HP, Lexmark, etc.) will then be used to spool the data to the print server. 3rd party driver, including universal driver from vendors, can cause various issues and even sometimes blue screens (BSOD).

The default Citrix print policy of DIRECT print can be set to INDIRECT print for Network printer. In that case no 3rd party driver is installed and print data is routed through the HDX connection using the Citrix universal printer driver (needs to be set). 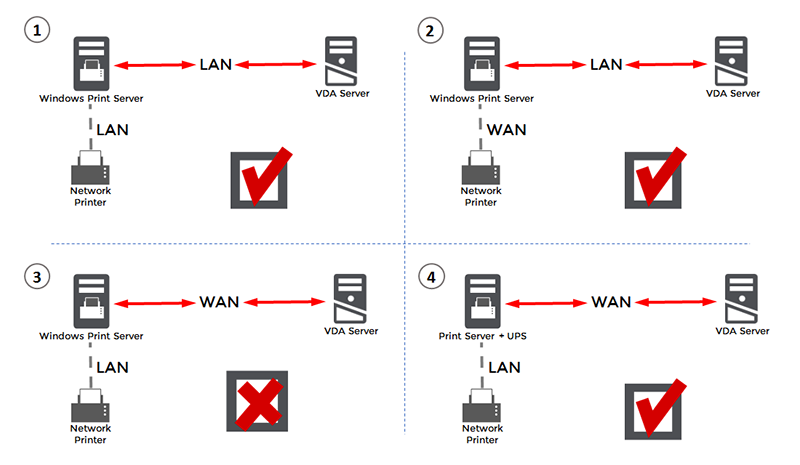 Please keep in mind that the placement doesn't consider the indirect print. You really need to make a plan, otherwise print data might transverse the WAN link three times before getting to the network printer. This is the reason why I always advise to have a printing concept first before implementing a solution.

Rules 1 to 6 are for using Citrix client printer mappings with Citrix universal printer driver and are the most preferred recommended printing setup by Citrix. Rules 7 to 10 are for using network printer with Microsoft print server and/or Citrix universal print server. Don't make the mistake of thinking that printing is not worth spending time on (I have still not seen the paperless office!). Printing is still at the top of the Citrix Technical Support incident list.

When using 3rd party printer drivers what can happen?
If you are lucky, nothing. However, you might see: print spooler crash, delayed logons, stuck logins, or the worst blue screen of death (BSOD) - server Crash. The crashes have been tremendously reduced due to Microsoft architectural changes, and last crash I encountered was with Server 2008 R2.

Why only use the Citrix Universal Printer Driver (UPD) based on EMF?
With Windows Clients, EMF actually utilizes the local client printer driver with all its capabilities. In addition, the data stream is optimized and can even be tweaked for WAN connections. In the field, I found a high rate of working printer drivers with the Citrix EMF.

Why not use HP Universal Printer Driver?
The HP UPD should only be used for network printers mapped to the VDA Server or, if it fits your needs, use the Citrix universal print server (UPS). With HP UPD make sure you use the latest version and printer isolation since the driver has been buggy in the past. HP supplies group policies for their UPD which should be used.

What is printer isolation good for?
As it states, it isolates the printer driver and therefore protects the spooler for crashes. In case the driver is buggy, the isolation might fail for a user but the driver will not crash the print spooler service. This is important for VDA server to maintain printing functionality for all other users on the same VDA server.

Why disable Microsoft Point-and-Print (P2P)?
P2P automatically installs printer driver without you really knowing it. That can be very dangerous because you might spread a bad printer driver to all servers in your farm. By disabling P2P the administrator must install the printer driver and is a controlled action. Another option is to be in control of the print server.

Why should a print server be close to a VDA server and not located in a branch office over WAN?
Especially with Office 2010 and above, printers are "live" enumerated and over a WAN link might take a long time. The VDA server would do a Microsoft RPC call over WAN to the print server and is very slow and sluggish. RPC was not designed for good data transport over WAN connections. See the print placement topic before.

What is the Citrix Universal Print Server (UPS)?
It's a Citrix printing component that needs to be installed separately. The capabilities are limited and are not a solution for every Citrix customer. If you want to use UPS make sure you do some extended testing and don't forget the fallback feature. 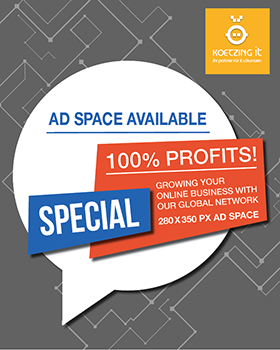