Citrix released XenDesktop/XenApp 7.12 and with it some features that have been around for a very long time in the IMA architecture, that is up to XenApp 6.5. If you have worked long enough with XenApp 6.5 or before, you might be thrilled to know those features are back, or at least something close to it.

Here are some things (not all) that I picked from the release that I found worth mentioning.

High availability using Local Host Cache (LHC)
The LHC is back! From day one of XenDesktop 7, Citrix CTPs and others were getting after Citrix and the missing LHC functionality. Citrix later came out with the "Connection Lease" and was more of something that looked like a poor kid compared to the LHC. Now, this is the first "try" of the LHC within XenDesktop 7 implemented as High Availability Service. BTW, Citrix is using the 'NT Service' accounts that have already caused issues in the past (see VDA upgrade issues). I'm writing TRY because of the known issues that you will find below, pointing out the problems with HA Windows service.

In a nutshell, how it works:  Another Windows service, the Config Synchronizer, syncs continuously data (only when changed) to HA service that stores the data in the LHC; local DB. If the site DB fails, then the principal broker sets the secondary broker active to take over to serve until the site DB is back online. 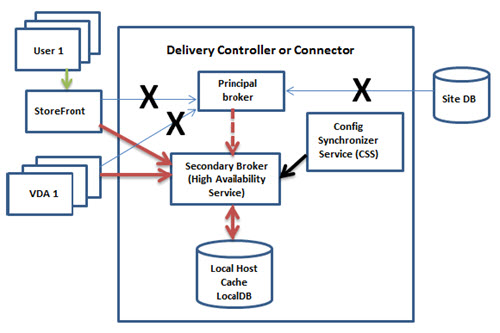 Tag restrictions with Application Groups and Desktops
This sounds like an interesting way to get something back that many old XenApp Admins were looking for from the start of XenDesktop 7. How can I publish a single app or desktop from one machine out of a Delivery Group? So far you would need to create an extra Delivery Group and machine catalog and then move the machine in question. Instead of that, you can now set tag restrictions that will limit a delivery group or machines in a machine catalog. Let's see how practical that is in reality. Here is the Citrix description:

HDX Enlightened Data Transport (for evaluation only)
This is another try out for customers, I guess, to get some real feedback if it's going in the right direction. The new HDX data transport layer is designed for challenging long-haul WAN and Internet connections. This new transport layer uses UDP to improve data throughput for all ICA virtual channels to include Thinwire display remoting, client drive mapping, printing, multimedia redirection, and others. HDX Enlightened Data Transport should only be enabled for evaluation purposes and done with a new policy setting but a fallback to TCP is part of the release. The HDX feature requires Receiver for Windows 4.6 or Receiver for MAC 13.5

NetScaler Gateway High Availability (HA) is supported with Framehawk
Framehawk is slowly gaining attention by customers and it's overtime to make it available through a pair of Netscalers that are working in High Availability.

NOTE: This is just a selection of issues I picked!

Notes to LTSR after the NEXT Long Term Service Release (LTSR)

The following platforms will not be supported after the next LTSR:

The following features will not be supported after the next LTSR: